Spherical hydrophones are an elegant solution for achieving a fully omnidirectional receiving response. Other receiver designs, which generally rely on either a piezoelectric cylinder or disc, have a beam pattern that changes with frequency. At higher frequencies their beam narrows. However, spherical hydrophones provide a fully omnidirectional response regardless of frequency. This is their primary advantage.

Spheres are also inherently strong. As a result, spherical hydrophones are robust. They have high depth ratings, often exceeding several thousand metres. Additionally, their rugged quality is an advantage during handling and deployment.

Piezoelectric spheres are actually an assembly of two hemispheres. Whether they are molded in a rough hemispherical shape to start, or cut directly from a block, they are generally finished on a CNC machine. The machining ensures tight tolerances and a smooth surface finish. It also adds an expense to the production process. So, producing a piezoelectric sphere requires two, relatively expensive ceramic hemispheres and a high precision assembly process. As a result, spherical hydrophones are generally a more expensive design option.

Spherical hydrophones often have a shape that hints at the spherical sensor within, though this is not always the case. A hydrophone with a cylindrical body and a rounded tip (as illustrated above) may contain a sphere. However, it could contain a cylindrical sensor. Rounded ends are common: they simplify the molding process. So, the outer shape doesn’t necessarily indicate the geometry of the piezoelectric sensor within. Be sure to consult product specifications or talk to the manufacturer. 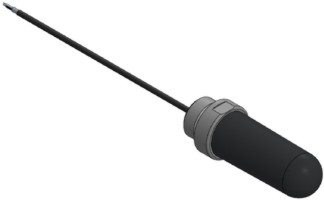 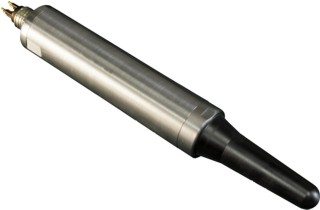 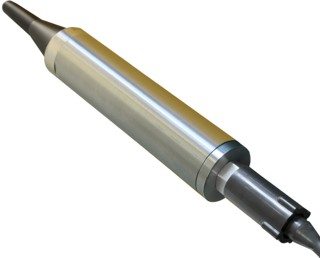 The book “Transducers and Arrays for Underwater Sound” (John L. Butler, Charles H. Sherman) provides a brief, theoretical comparison of a spherical hydrophone and a cylindrical hydrophone of comparable geometry.  In the example provided, the cylinder height and diameter are equal to the diameter of the sphere, and both sensors have the same wall thickness. A portion of the discussion can be read here.

In summary, the two sensors have the same receiving response at low frequencies.  However, the sphere has a higher resonance and thus a wider usable bandwidth.  Additionally, it suffers a larger decline in sensitivity from the diffraction effect. (A more detailed explanation of usable bandwidth and the diffraction effect can be found in the article “Usable Frequency Range of a Hydrophone”.)

Of course, the primary advantage of the spherical sensor remains the omnidirectional response that is independent of frequency.

Sensor Technology Ltd. offers a line of spherical hydrophones that includes models with and without an integrated preamp.  You can explore a few of our existing designs here. Contact us to discuss other models or a custom design made specifically for your application.